As you may already be aware from news & media that CDSL systems were impacted because of a malware attack, and teams at CDSL continue to ensure they get back to being operational, more on that here cdsl cyber attack: Clearing at CDSL back to normal post cyber attack - The Economic Times

CDSL’s internal systems went offline due to a technical issue on Friday, 18-11-2022. This had impacted several processes, especially the ones related to settlement and MTF pledge. We covered this event and its repercussions in a previous post: CDSL Currently Down. Regular Processes Impacted.

At Dhan, we extensively use CDSL as a depository participant (DP) and also CVL from KRA (KYC Registration Agency). We received an update on Sunday, 20-11-2022 that CDSL’s systems were back up, promptly after which our operations and risk teams were back at work on a holiday to ensure that you can go about trading and investing normally on Monday. While CDSL is back for market operations - which means existing users & clients of Dhan can use their accounts perfectly fine for normal trading and demat operations, CVL continues to be impacted as of now.

Due to limited or no availability of CVL KRA services and intermittent availability of CDSL systems for onboarding - we are unable to register, fetch and update KYC records of new users who are wanting to open their accounts on Dhan. At this moment, over a few thousand users of Dhan are impacted due to this.

First of all, we regret the inconvenience caused to our new users, this is not what we stand for where we aim to delight our users in every stage with a better customer experience. We’re sorry, as at this moment things are beyond our control and we are awaiting updates from CVL/CDSL for the same, as these are important regulatory aspects which we cannot skip.

Our teams are in constant communication with CDSL / CVL to ensure that our new users are on board quickly and they start trading and investing with Dhan soon. The good folks at CDSL / CVL continue to do their best to be back in action and we have been communicated that things are expected to be normal by end of the day on Wednesday, 23 November 2022.

We will update this post once normal operation resumes, and will also communicate to users via email/notifications once the systems are back in action. Meanwhile, users can continue to update their KYC documents, we continue to be fully operational at our end.

New users, while they await to start trading or investing on Dhan, we suggest browsing some of Dhan’s resources on Markets on our YouTube channel: https://www.youtube.com/@DhanHQ or follow us on Twitter: https://twitter.com/dhanhq

UPDATE: CVL KRA services are up and running again. We request those who were stuck in the onboarding journey on Dhan to retry now

Hi @Dhan waiting since 2 days to open demat ACC but due to this kyc issue unable to open acc. When will this issue be resolved?

@Shriram @dhan on Sunday itself the cdsl said that their systems r functioning well. Pls clarify 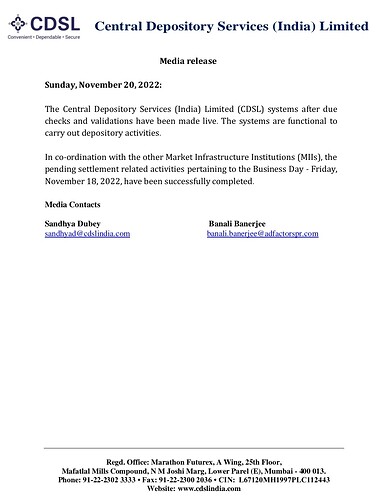 Yes, CDSL is on and back, but CVL systems are down which is a KRA and group company of CDSL. Due which we have thousands of KYCs / Onboarding stuck for approval. We continue to be in touch with them, hoping for a quick resolution.